SMARTSOURCE TAKES TO THE ROAD IN MINNEAPOLIS 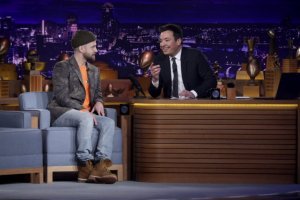 For those SmartSource® clients that don’t know, a big part of our business is serving the entertainment industry with IT rental and service needs. Since anything entertainment has high general appeal, we thought we would write an article about some of the fun projects we engage in, not only in Los Angeles but nationwide.

One of these projects is working with the cast and crew of The Tonight Show with Jimmy Fallon as part of their road show, which took place in Minneapolis for the Super Bowl on February 4th. We provided the IT equipment (printers, copiers, laptops, etc.) and associated service, working for both the show production staff, as well as the people responsible for the broadcast, to ensure all their needs were met.

As a company with ‘brick and mortar’ in 20+ locations nationwide, our Chicago operations team was tasked with installing the client’s disk image on the computers and delivering the equipment to the Orpheum Theatre in Minneapolis, pre-loaded with NBC’s standard software. Because of their expertise with the Entertainment industry, we sent SmartSource’s Los Angeles team to provide local support for the NBC remote. Prior to the show, we also delivered computers to NBC Universal in New York City (NYC). The Tonight Show team used the NYC-based computer systems to prepare for the remote in Minneapolis and then took the computers with them from NYC to Minneapolis to be used at the Super Bowl. At the end of the rental, our Chicago team dismantled the equipment.

This is just one example of how the SmartSource team works in concert to execute Entertainment projects across the country. For more information on other work we’ve done, click here or visit SmartSourceRentals.com.