Convening Leaders, the annual meeting of the Professional Convention Management Association (PCMA), has—as is its modus operandi—iterated a centralized hub for technology and non-traditional learning for several years. The hub has changed names and programming in keeping with the fast pace of technology and expanding interest levels of attendees. In Nashville this year, attendees were exposed to a range of opportunities at the “Future of Face2Face.”

One can only describe the Future of Face2Face as a room in motion. Attendees plugged into the experience via wireless headsets connected to radio-transmission receivers (or smartphones), which allowed them to tune into broadcasts by selecting the channel number associated with a specific presentation. Within the same room, conference-goers had access to programming from up to thirteen different locations within the conference. 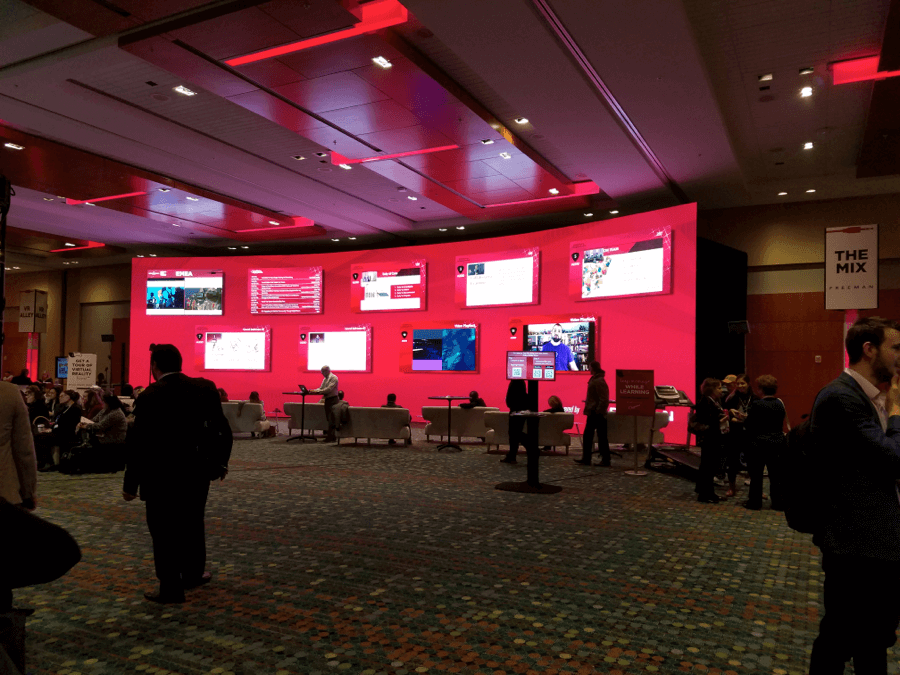 The audio and video feeds of nine of the Convening Leader sessions and social media channels were available to conference-goers through The Mix, a 65-foot long, 18-foot high wall mounted with nine, Ultra High Definition flat-screen displays. Each numbered monitor delivered a different live webcast, archived video, or social media feed such that even two attendees seated side by side could view entirely different programming. 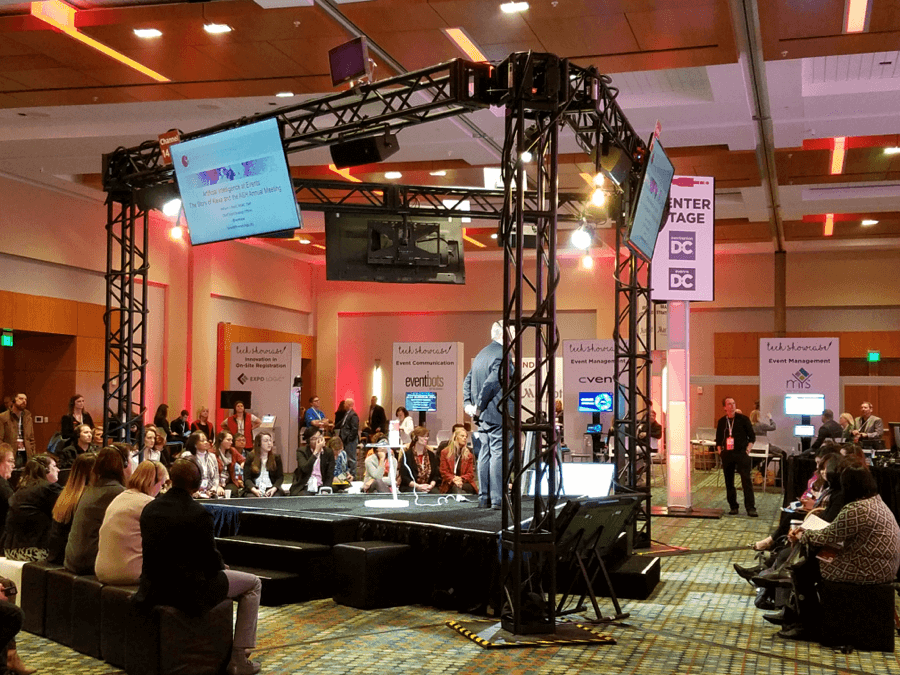 The high point of collective learning

The Future of Face2Face featured multiple learning and networking spaces. Speakers at CenterStage—a raised triangular platform in the middle of the room—presented 30-minute case studies on innovative ways to approach design, branding, data, revenue, and more. Flat panel monitors, displaying session titles, were secured to an overhead truss alongside lighting. Confidence monitors were also placed at floor-level to assist presenters. 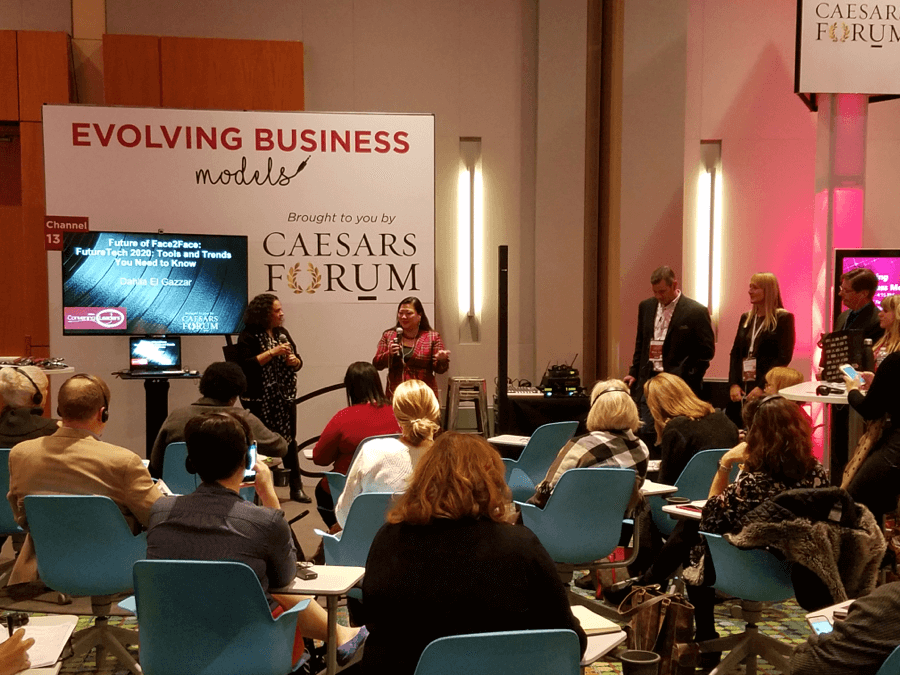 Three smaller, collaborative theatres called Changing Mindset, Evolving Business Models, and Changing Brand Strategies served as places for facilitated and self-paced learning. In these interactive spaces, speakers posed questions and invited input from audience members on a variety of topics, including the future of technology. Flat-screen panels on pedestals served as digital signs and PowerPoint monitors. 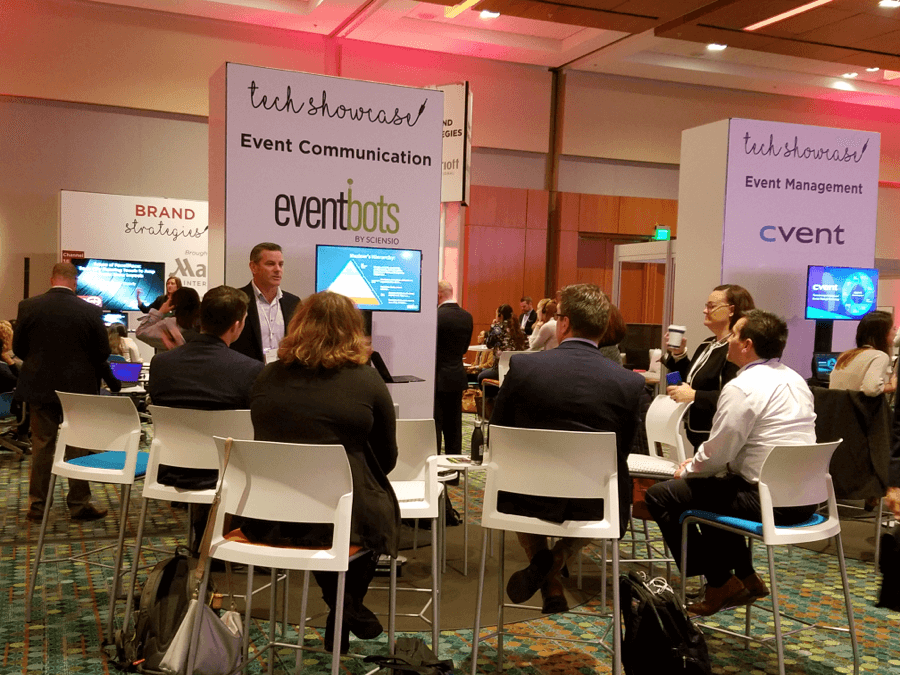 While the Future of Face2Face facilitated learning on a variety of topics, it was heavily technology focused. Mini exhibit spaces (Techpods) dotted the room, giving technology companies the opportunity to demo products. At the Techbar, experts from Dahlia + provided one-on-one advice on integrating digital solutions into events. (Re)ality Alley was the hub for computer-generated environments, offering virtual, augmented, and mixed reality experiences.

Small touches, such as the ability to watch video feeds on The Mix while walking on a treadmill—an ode to the standup desk, perhaps—and a complementary barista-style coffee experience rounded out the Future of Face2Face. It was a counterpoint to the more traditional learning settings (panel discussions, round tables, and PowerPoint presentations) that also took place in breakout rooms although the latter were notably fewer in number compared to previous years.

Evolving into the future

As always, PCMA met expectations with diverse offerings, experimentation, and a few surprises. It seemed as though this type of space has not only grown in size at Convening Leaders, but popularity and emphasis as well. Not long ago, it was a small area sprinkled with tech vendors, a techbar, and some presentation cubbies. Not so now. The Future of Face2Face was as advertised.