In its latest study of trade shows, conventions, and conferences in the U.S., titled The Economic Significance of Meetings to the U.S. Economy,” Pricewaterhouse Coopers (January 2014) reported that there were 284,600 meetings in the U.S. with a total of 87 million attendees. These events contributed $115 billion to the nation’s GDP. What about the exhibitors? How much did their participation in these events contribute to the bottom line?

There are many variables, but one factor that is helping exhibitors increase revenues stemming from trade show-generated prospects is event technology. A straight line can be drawn from the effective use of event management technologies to increased booth traffic, engagement, show exhibit, leads and market data captured, as well as the enhanced ability to convert a trade show-generated lead into a bona fide sales prospect. The key lies in understanding the various event technologies and their roles in helping exhibitors gain the maximum ROI on their show participation. 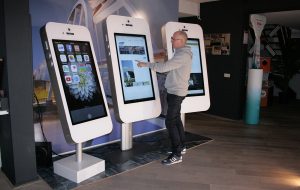 A study conducted in 2013 by Exhibit Surveys, Inc. and Lippman Connects found that “proving exhibitor ROI” was the biggest challenge today’s trade show exhibitors have. Event organizers recognizing this and trying to stave off exhibitor churn are actively promoting event technologies like those noted in our line-up. They know that if exhibitors can better qualify and quantify attendee booth engagements, lead capture, new market intelligence, etc., all gleaned from having leveraged event technology, their shows’ exhibitors will be closer to proving their ROI.